This pattern was inspired by another, and I've been asked not to mention any names.
Hopefully I've removed enough information to please the request of the original designer, but I do not want anybody to claim I'm trying to steal an idea. I've actually been told recently that someone had been knitting stuffed-hexagon-quilts back 40 years ago!
♥
This is just a pattern for a hexagon. From comments I've received, it's fairly different from the pattern that inspired it, but I like it. I like it so much I want to make a king-sized quilt out of cashmere sock yarn and stuff them with feathers and never leave bed again. I won't though, because I don't have the stamina to make a billion of these. Cat toys I can handle though.
But here's what I did to make mine: 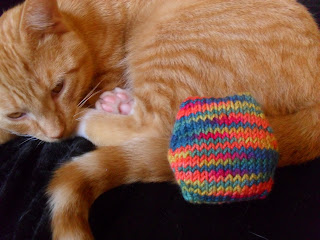 honeycomb
for a no-nonsense, basics-only version, scroll to the end of the post 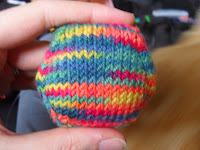 (This pattern is written for magic loop. If you've never knit magic loop before, now is a great time to learn-- hexagons are wicked easy and if you mess up you'll only have a few rows to frog. If you're going to use two circulars or dpns, ignore the magic cast-on directions and use a provisional cast-on, crochet cast-on, or just a regular long-tail that you can seam later.)

Materials:
One circular needle, 24" or longer, OR two circular needles, any length, OR dpns in appropriate size for your yarn.
Yarn! ...Anything.
Tapestry needle, scissors, and a bit of Fiberfill

Gauge:Doesn't matter. Just use needles that give you a fairly firm fabric (because of the stuffing!)

Terms:
tbl- through the back loop
M1 (R or L)- a lifted increase, Right or Left side of stitch
SSK- slip, slip, knit- slip two stitches, separately, knit-wise onto right-hand needle, slide them back to left needle, and knit both together tbl.
K2tog- knit 2 stitches together

(You are making your M1 increases on the second and second-to-last stitch in each increase row. This keeps a K1 border at the edge of your honeycomb and makes it look nice and crispy. You'll do the same for the decrease sequence.) 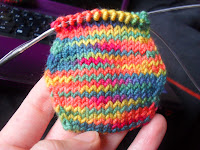 Stuff you can change:
Finishing: You really don't have to use Kitchener stitch if you're morally opposed. You can three-needle bind off, but it won't be seamless and it won't mirror the cast-on edge. But if you've used a cast-on you'll have to seam it will :)
Increases: You can kfb all increases if you don't mind the purl-bumps it causes, or you can also use a yarn-over. If you yo, just knit the yo-stitch tbl on the next row.
Decreases: K2tog all decreases, SSK all, or use SL1, K1, PSSO instead of an SSK. Or just use 'em for all your decreases.

This one has been adopted by Butters: 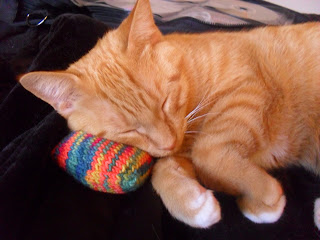 purl
Sometimes you look at a pattern that is so simple-looking the price tag gives you an aneurysm. Here you'll find recreations of those types of patterns, previously made for friends of mine who couldn't afford to knit items with prices attached. Follow on tumblr for links to great free patterns and other goodness. Yay! Now we support other crafts too. It's amazing what art-loving, fabulous people can do when they get together to share!